The History of Rhodes The Fender Rhodes story:
A brief history of Rhodes pianos

Over seven – soon to be eight – iterations since the late 1960s, the Rhodes electro mechanical tine piano has invariably changed the course of music history, defined genres and given rise to no small number of musical icons. And to think: it all began with some leftover parts from US Army bomber planes.

The year is 1942. World War II has been waging for three years and pre-eminent piano teacher Harold Rhodes – who by the age of 20 was running a chain of ‘Harold Rhodes School of Popular Piano’ locations across the United States – finds himself in the US Army Air Corps, where he’s been providing piano lessons and entertainment to wounded servicemen as a form of therapy.

Of course, carrying a regular-sized piano from bedside to bedside wasn’t an option, so Rhodes set about creating something more practical. Using leftover aluminum tubing from B-17 bombers – as you do – he concocted a 29-note xylophone-like instrument, which would come to be known as the Army Air Corps Lap Piano (or the ‘Xylette’). It mightn’t have been the catchiest name, but upwards of 125,000 Xylettes were put into production, and the seed for what would become the Rhodes sound was born. After the war, emboldened by the relative success of his lap piano, Harold founded the Rhodes Piano Corporation and produced the Rhodes Pre-Piano – a logistical, technical and stylistic evolution of the lap piano – in 1946. This was the first electric Rhodes piano, and featured a built-in amp, a 38-note keyboard and wooden top, the production and maintenance of which kept Rhodes busy for some time.

A little further down the line, Rhodes entered into a partnership with Leo Fender (of electric guitar fame) in 1959 and began manufacturing the next Rhodes iteration: the Fender Rhodes Piano Bass, which utilised the bottom 32 notes and was used liberally by The Doors’ keyboardist Ray Manzarek (though a later Fender Rhodes model was used on ‘Riders of the Storm’). Leo Fender was bought out of Fender by CBS in 1965 (to the tune of $13,000,000), and CBS released the Fender Rhodes Mark I that year. From that point on, various technical and aesthetic tweaks were common from one iteration of the piano to the next, as the company coped with soaring demand for their revolutionary instrument in the United States and beyond.

Later, in 1974, CBS decided to ditch the ‘Fender’ name and rename the piano, simply, as the Rhodes Mark I. Almost a decade later, as the instrument enjoyed a mainstream popularity like few before it, the Rhodes MK II hit the market in 1979. The evolution of the piano continued; and the loyal following of the Rhodes sound continued to grow.

For many Fender Rhodes fans, like engineer, professional Rhodes player and current Rhodes Chief Product Officer Dan Goldman, who first fell in love with Rhodes pianos when he was a teenager, it’s a sound that simply couldn’t – and can’t – be beaten. “It went beyond the actual instrument itself,” he says. “It became…I don’t know…there’s Rhodes the instrument, and there’s Rhodes the sound. And the sound kind of transcended the actual physicality of the hardware.”

Besides the aesthetics (it looked cool), tone (it sounded amazing) and plasticity (it could be tuned, tweaked and distorted as much or as little as a player desired), the success of the Rhodes piano can also be attributed to another factor: you could turn it up. Before the Rhodes, pianos couldn’t match the noise made by guitars, horns, drums and bass, and so were often relegated to the background of any given composition (or the reserve of soloists and concertos). 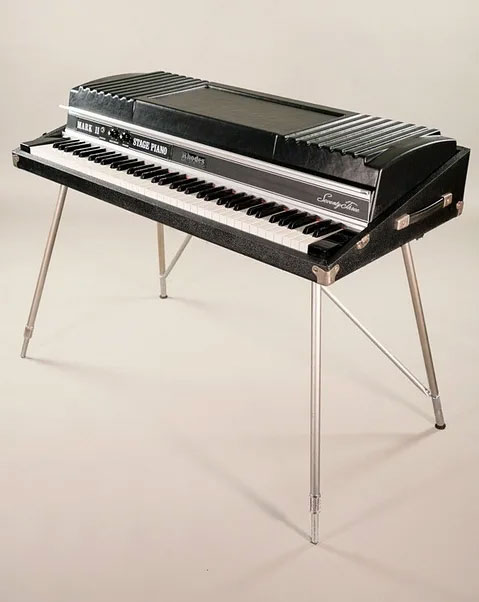 “the Rhodes can hide inbetween the character of the acoustic instruments, or it can be on top.”
– Herbie Hancock

But the Rhodes changed all that, and enabled the black-and-white-keyed instrument to enter the mix in a way it hadn’t been able to before. “The reason a piano isn’t in an orchestra is because the piano doesn’t blend,” said Rhodes icon and pioneer Herbie Hancock. “[The piano is] a soloist instrument…because it doesn’t mix with anything. But the Rhodes, the Rhodes can hide inbetween the character of the acoustic instruments, or it can be on top.”

In 1983, then-head of CBS William Schultz bought Rhodes for himself, marking an official end to the CBS era, during which (between the years of 1965-1984), it’s estimated that some 250,000 Rhodes pianos were built. The first iteration under Schultz’ watch, the Rhodes Mark V has been considered by some fans as “the ultimate Rhodes.”

Before Hancock worked his magic with the Rhodes, Miles Davis was arguably the first to push the instrument into the limelight by requesting that his pianists play Rhodes instead of traditional pianos. After Davis came Duke Ellington, Bill Evans and Hancock – and then the likes of The Beatles, Marvin Gaye and Stevie Wonder. The cat was well and truly out of the bag. “There was a crazy amount of number ones that featured Rhodes pianos in the late ‘70s and early ‘80s,” says Goldman, who spent a large part of his life playing Rhodes professionally as a touring musician with Morcheeba, and later running a successful Rhodes repair business. “That sound was literally part of everybody’s lives, if they knew about it or not – it was totally ubiquitous.”

In 1987, Rhodes was bought again, this time by Roland, a subsidiary of the Japanese owned Kakehasi Corporation. Harold Rhodes was allegedly not informed of the sale. Instead of producing electro mechanical pianos, Roland – which was more interested in the Rhodes trademark than the instrument itself – made keyboards with built-in Rhodes piano sounds. Harold Rhodes wasn’t happy. “He wouldn’t have one in the house,” his wife, Margit Rhodes, told the New York Times in 2001.

The coolest man in jazz made the Rhodes the coolest keyboard instrument in the world. Harold Rhodes suffered a stroke in 1996, and in 1997 Roland returned the Rhodes name to its rightful owner with the help of Harold’s good friend Joseph Brandstetter. Joseph had worked closely with Harold in education from 1989 to bring the Rhodes Piano Method to thousands of students across United States,(see Rhodes Piano Method .com) and in 1997  Joseph saw to it that that Harold  received a NARAS -Grammy Lifetime Presidential Merit Award for his services to music.

Though Rhodes had long promised his fans a return to the instrument’s true electro-mechanical form while working with Brandstetter, he unfortunately wasn’t able to bring his promises to fruition before his death in 2000, at the age of 89.

The best lessons in Rhodes history, of course, can be found in the music itself. And since the 1970s, some of the most iconic names in music have either used the Rhodes in a starring role or as a dynamic and charismatic backdrop for their compositions. From the aforementioned Hancock, Davis and the funk and acid-jazz movements in which the Rhodes found its groove through the ‘70s and ‘80s, to everyone from Ray Charles, Marvin Gaye, Radiohead, Erykah Badu, Steely Dan, Gil Scott-Heron and Nils Frahm – the Rhodes legacy spans entire genres, decades, styles and aesthetics.

And though much about the look and feel of the Rhodes piano has changed over the years, the basic concept for every new model has always been designed around Harold Rhodes’ asymmetrical tuning fork design. And it’s from this foundation that Rhodes, under the stewardship of chairman Matt Pelling (founder of Loopmasters), will be using the highest-quality parts and most advanced manufacturing processes to bring Harold Rhodes’ vision of a new electro mechanical Rhodes to life in 2021.

Finally, the world has another electro mechanical Rhodes again: designed to honour the Rhodes name, legacy and sound in every conceivable way. Recreated by fans, for fans; the Rhodes MK8 is the authentic reimagining of a classic – a brand new chapter in a well-worn and much-loved saga.

Or, as Goldman puts it: “This piano is going to be really, really good.”

The world has another electro mechanical Rhodes again